Can You Answer a Question on Crimea and Crimean Tatars? Have a Gingerbread! 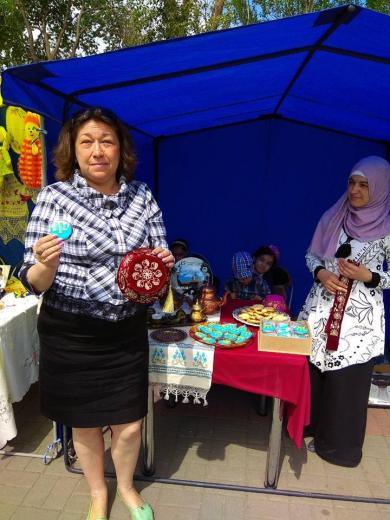 On 12 May, in terms of “Zaporizhzhia, the City of Happiness” festival, every part of Zaporizhzhia region and every ethnic minority could represent themselves. Crimean Tatars didn’t miss the opportunity, so Muhammad Mamutov (Imam at Zaporizhia Islamic Cultural Centre mosque) spent the day with his wife and children representing the Crimean Tatars (self-designed as “Qırımlı”) Culture. During some time, they were accompanied by another parishioner of Qırımlı origin.

The exposition consisted of crockery in Crimean Tatar ornaments, o coffee set, a cezve, a kettle, some embroidery (on fes and decorative towel), a woman’s belt … And the sweet component of the programme, gingerbreads sugar coated to look like a Crimean Tatars blue flags with golden Tamga. One could get that tasty souvenir, having answered a question on the history of Crimea and Qırımlı culture. The aim of this was to tell people more about the Crimean Tatar culture, for even when someone didn’t know the right answer, they were offered all the necessary explanations.

Many people got really involved and aked plenty of additional questions on the subject, so they were awarded with gingerbreads anyway, for trying hard. Thus, at the end of the day there were only several gingerbreads left, while all the rest became trophies of the participants of that interesting quizz.