Let’s Save Our Planet: Schoolchildren Trying to Take in Global Problems 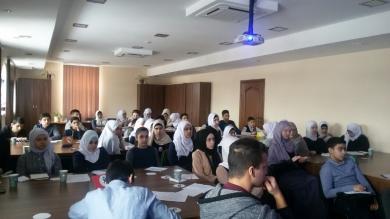 A Conference titled “Let’s Save Our Planet” was held at Kyiv Gymnasium “Our Future” on 22 February. This event was noteworthy not only for the choice of topics to discuss for 7 to 10 graders, but for all the presentations and discussions were held in English (as one of the Conference’s goals was improving the student’s speaking skills). Still, there will be more discussions of those matters soon, this time in Arabic - the secont foreign language taught at the Gymnasium.

The discussion on such serious modern challenges as “Children of War”, “Children with Disabilities”, “Fighting Cancer”, as well as two ecology-related topics, “Keep Our Planet Clean” and “No Water - No Life” was in English, with pauses to ask the meaning of the new words and expressions.

The schoolchildren divided in 5 teams, with each of them representing their own topic and participating in the discussions of other teams’ presentations.

“Keep Our Planet Clean” team was the one to open the event. After their presentation, a word was given to an invited guest, author of Life without Trash project Tetiana Evloeva, who drew everyone’s attention to the fact that only refusing to create unnecessary waste could solve the problem in the first place, not recycling, which was the last resort. This opinion was illustrated with a good example of football teams, sponsored by Nike, wearing uniforms made from recycled plastic bottles. The schoolchildren were invited to think about the fact, if that was an achievement or a tragedy. Teenagers were really impressed by that example, and after taking some time to think over the question, came to a conclusion that it was a tragedy that people had so extensively littered the planet that the need to wear clothes from recycled trash ever rose.

According to the teachers of Gymnasium “Our Future”, such events offer both the language practice for their pupils, and a social training, raising the teenagers’ sense of personal responsibility for the world.