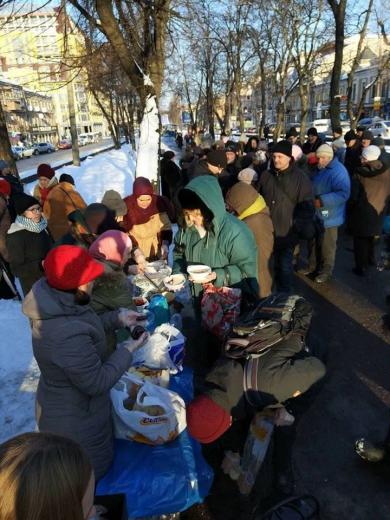 On 20 January, Kyiv Muslim women joined the “Help the Homeless” initiative for the first time: activists of Volunteer Movement “Mariam” used some donated money as well as their own cost to cook, deliver and distribute split pea soup, as well as a large bag of warm hats and scarves. A week later, on 27 January, they were joined by Muslim women from the namesake Women’s Social Organisation “Maryam”, who, jointly with the volunteers from the Movement, bought 2 kg of cheese, 8 wursts. Bread, sauces, tea, and helped make 400 sandwiches for further distribution among the homeless.

10l of maize porridge of ingredients donated by the Volunteers Movement (including non-Muslims who regularly join visits to orphanages, — ed.), were cooked by Family House halal restaurant free of charge (not every housewife has a 10l pan and a heater with enough capacity for cooking that amount in reasonable time). It was the restaurant that also helped cook split pea soup on the previous occasion.

The participants from the Volunteers Movement “Mariam”, with money donated by well-doers, bought a large bag of medications according to the list presented by “Help the Homeless” initiative.

According to Ms.Olha Abdalla, the Volunteers movement orphanage project coordinator, the idea of joining “Help the Homeless” initiative arouse when they had to cancel their scheduled visit to the orphanage due to quarantine:

— We decided to join the initiative by a Volunteers Group “Help the Homeless” and make our input in their weekly Saturday meals distributions among the homeless people. We also will try, to the extent possible, help them with the necessary medications.