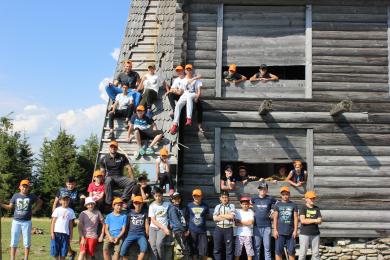 It’s been four days since the children’s camp “Druzhba” (Ukr. “Friendship”) started, but the young Muslims’ recreation is already full of adventure and impressions: scouting in the Carpathians, Shepit waterfall, Synevir lake, and even visit to Brown Bears Rehabilitation Centre helping the animals who had experienced abusive treatment or natural disasters. Animals imported with violations of the current Ukrainian legislation and confiscated bears are also kept at the Centre while the court hearings proceed.

Training in archery started today, and the boys and the girls were divided in two groups : while one practices in archery, the other bathes in a mountain river, and then they switch turns. The children have several days to master their skills, as an archery contest is to be held on either 7th or 8th of August.

In the evening, the teenagers gather round the campfire to hear some stories; today will be the third of such gatherings. And, of course, the camp stewards will make sure everybody goes to bed on time, for tomorrow is another day and another scouting tour, this time to the highlands.

The camp for children aged 9-14 in Transcarpathials (Tiachev district) will last until 9 August. The revelers get three full halal meals daily, have access to spring water and are accommodated in rooms with individual restrooms. Among their everyday activities are lessons of Islam and Qur’an, sport games in the open air, master-classes, quests, and swimming in the Brusturianka river.