There’s No Such Thing As Somebody Else's Children: IDPs Need School Supplies Aid! 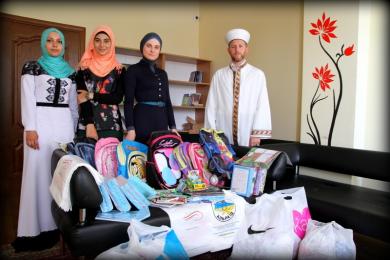 Families with schoolchildren will keep me honest: it’s quite expensive to prepare the offsprings for the new school year. What should the Internally Displaced Persons do, then, when they hardly have enough money to pay for their food and apartment, after losing their homes, belongings and regular income due to the war? Members of Women’s Social Organisation “Maryam” decided to join the project of IDPs Assistance Centre at 9/11 Frolivska Str and collected the school supplies for the displaced children as much as they could during the whole previous week.

They’ve been buying pens, copybooks, pencils, sharpeners, daily planners, watercolors, etc. during the previous week, and brought school bags donated by their own children. Besides, they brought some clothes for the babies and some for kids of other ages.

“Maryam” activists took it all to Frolivska Street yesterday. The local volunteers assured them that there’s still a huge demand for the school supplies, and that people are also welcome to bring the old school uniforms too small for their own kids, as well as schoolbags and office supplies, to the IDPs Assistance Centre.

A new generation of Ukrainians is coming, and this generation didn’t see the Soviet Union and the post-Soviet crisis. This generation thinks of such “adult problems” of our society as social, political, economical hardships Ukraine faced, and is looking forward finding means of overcoming those problems. The IDP children’s life is full of hardships and bitterness. Let’s make it easier for them to change the world for the better when they grow up, and provide them with at least the school supplies they desperately need in order to get a good education for reaching their goals!