Discover The History Of Qur’anic Text With The New Book By Muhammad Al-A’zami! 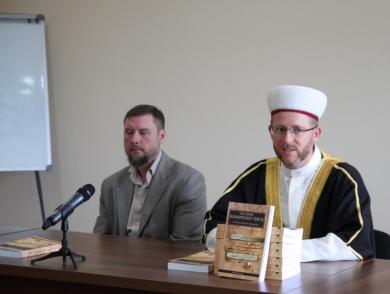 A Russian translation of the latest book by Muhammad Mustafa Al-A’zami, “The History of the Qur'ānic Text: From Revelation to Compilation” was held on July 24, 2015

A Russian translation of the latest book by Muhammad Mustafa Al-A’zami, “The History of the Qur'ānic Text: From Revelation to Compilation” (“Ansar Foundation” Publishing) was held on July 24, 2015 within the framework of  IV International Summer School For Islamic Studies.

Mufti of RAMU “Umma” Shaikh Said Ismagilov told the participants the brief history of the Holy Book from relevation of the first ayahs to compilation and final codification into one text according to the guidelines given by Prophet Muhammad.

Shaikh Said also stressed that this edition’s publishing date coincides with an outstanding event, namely the Qur’an manuscript held by the University of Birmingham (United Kingdom) has been placed among the oldest in the world thanks to modern scientific methods.

Radiocarbon analysis has dated the parchment on which the text is written to the period between AD 568 and 645 with 95.4% accuracy. The test was carried out in a laboratory at the University of Oxford. The result places the leaves close to the time of the Prophet Muhammad, who is generally thought to have lived between AD 570 and 632.

The Qur’an manuscript is part of the University’s Alphonse Mingana Collection of Middle Eastern manuscripts, held in the Cadbury Research Library. The two parchment leaves were unclaimed and unknown for almost a century, until Dr Alba Fedeli, who studied the leaves as part of her PhD research, turned onto them and proposed to make the radiocarbon dating.

Mr.Ismagilov claimes that discovery to be an impulse for further exploration of Qur’anic history.