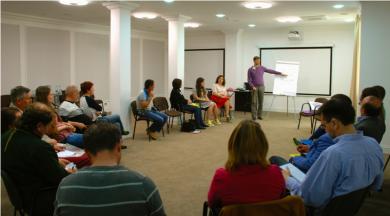 A four-day seminar-training “Approach And Social Partnership Coordination Between Religious Communities And NGOs During The Events On Preventing, Treating, Caring And Supporting people with HIV” became a follow-up of the February meeting of the Churches and Religious Organisations of Ukraine. Ms.Tetyana Sherbak, a representative of Women’s Social Organisation “Maryam”, participated in the event where Orthodox Christians, Protestants, Muslims and people of other religious views from Odessa, Kyiv, Kherson and Mykolaiv took part as well. They all united their efforts with NGOs and specialists in order to study the ways of possible cooperation in overcoming that social problem, and preventing epidemic as well.

The training was facilitated by All-Ukrainian Network “People Living With HIV” in Partnership with Social Organisation “Elios-Mercy” within a UASAID Project.

Problem of HIV/AIDS is often left behind the scenes in Ukraine, while every person has some risk to be infected regardless of their mode of life.

One of the lecturers, for instance, told about how a baby was infected by breastfeeding: there was a complication during the labour, and they transfused infected blood to the mother, who, without knowing that she was infected, breastfed the child. So the innocent baby was infected as well.

Unfortunately, such people face estrangement and rejection regardless their circumstances of getting HIV-positive. And to think that one can have a normal life if treated correctly, and even give birth to healthy children — even with both parents infected!

Besides, the training participants have developed strategies on assisting people with tuberculosis, orphans, ATO fighters and Internally Displaced Persons with post-traumatic stress disorder, and also learned some methods of rehabilitation of alcoholics and drug addicts and adaptation of former prisoners to normal life.