Seminar With A Motto “Be The Spiritual Guides” 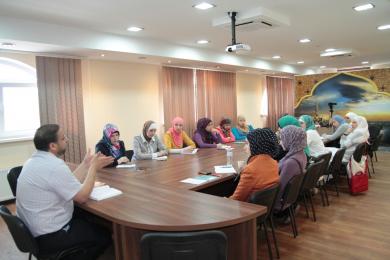 A seminar for female-activists of Muslim Social Organisations from Kyiv, Lviv, Vinnitsa and Dnipropetrovsk was held at Kyiv Islamic Cultural Centre

The first lecture was devoted to the topic of spiritual education. The lecturer, Md.Ismail Qady, tried to draw the audience’s attention to the problem of disguised passion every human being has. “... Many people have no idea they have one. For that reason the believers, especially those who perform the call to the righteous path, must control their feelings and actions. Public people must always avoid insincerity and showing off, especially those who call people to Islam,” - he noted. He also raised matters of spiritual education, as well as a Muslimah’s moral and psychological improvement.

Mr. Tariq Sarhan, head of the Kyiv ICC Department for Introducing Islam, spoke about the  examples of Muslim women who devoted their lives to bringing the message of Islam to other people. His lecture was filled with different life stories, parables and wise advices, and women from all over the country listened attentively. After that, they spoke about the problems they faced in their everyday life and work.

The second day’s programme was devoted to methods of memorizing the Holy Qur’an. Shaikh Haydar Al-Hajj spoke about the meaning of the Holy Book in our lives and shared some tips of reciting and memorising its verses.

In his second lecture, Shaikh Haydar spoke of the Muslim’s struggle with their inner self (nafs) possessed by every human being since they are born. Such passions are attracting everyone’s attention, possessing private property and defending it, interest for the opposite sex, etc. The lecturer spoke how this passions increase while a person matures and the impact they have on his soul. He concluded his speech with a statement that one can defeat nafs by reading and reciting the Holy Qur’an, restraining from sins and keeping patience.