How The Kharkivites Treated The Arab Girls With Borshch 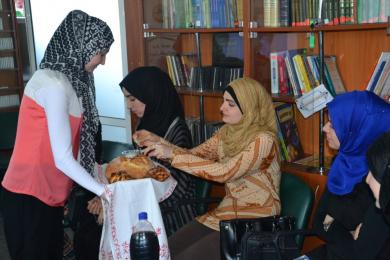 How The Kharkivites Treated The Arab Girls With Borshch

Arab girls will now have the thought upon leaving for home that Ukrainian culture isn’t as foreign as they thought earlier.  They learned a lot about the peculiarities of Ukrainian national clothes, footwear and headwear, dances. songs, wedding ceremonies, having visited a themed night at Kharkiv Islamic cultural centre. They also tasted some dishes of Ukrainian cuisine, like borshch, varenyky, zrazy and deruni. The “Al-Manar” volunteers eagerly wrote down the recipes for anyone interested.

All the Muslims of the world regardless of their race and ethnic origin are united by their faith in God, who clearly delivered His message on the matter with His Prophet, peace and blessings be upon him.  He told that only piety and good manners can make a man better than others in the eyes of God, not their origin.

The guests shared their impressions and told about different funny situations they were involved in when they first arrived to Ukraine, knowing neither language nor peculiarities of local everyday life and customs. They took part in the quiss as well, answering questions about Ukraine in general and Kharkiv in particular. And. of course, Arab girls  were glad to learn that great respect for parents is traditionally cultivated in Ukrainian families, — the same as in Arab families.