Do You Know How To Pay The Last Respects To Someone Dead? 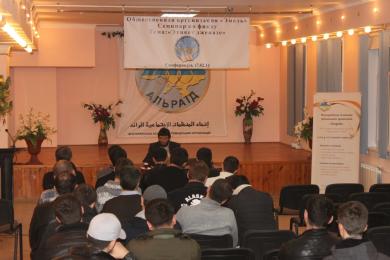 People usually start asking questions about rituals when they lose someone close and there’s already no time to study the details of this sad duty to the one dead. Crimean youth discussed this matter in the social media and found the current state wrong. Meeting their needs, the Social Youth organisation “Emel” held a seminar on Fiqh of funeral ceremony on February 17. More than 50 young people came to Simferopol Islamic Cultural Centre in order to deepen their knowledge of Islamic funeral ceremony (Janazah).

The topic of the seminar was chosen by the participants themselves through the open ballot in the social media. It appeared that Crimean Muslims consider this issue as a very important one to know. The guests learned how to behave themselves at the funeral, what is their duty towards the diseased person, how they can ease one dying and what to do after this person died, step by step. They learned how to pray the funeral prayer (Janazah-namaz) and how to wash the body, and many more -— from Shaikh Seitqadr Ibrahimov.

There was a practical part, too, where the participants practice all that on a mannequin.

the event traditionally ended with the treating and informal communication. “Emel” plans to hold more events of this kind in the future.

“We may devote the next seminar to another topical issue, namely the trading relations in Islam -— if, of course, the youth votes for it” -— Mr. Muslim Dervishev, the Head of “Emel”, said.