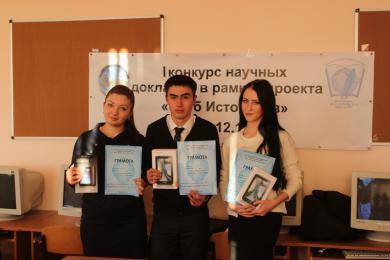 A solemn I Contest of Research on Crimean History Awards Ceremony held within the framework of Crimean Club of Historians  took place in Simferopol. The Contest had been facilitated by the social organisation “Emel” along with the History department of Crimean Engineering and Pedagogical Institute. The competitives were free to choose among several categories, including listed buildings in Crimea, ethnographical studies, peninsula’s prominent public figures of ХІІІ-ХVІІІ, etc.

The contest lasted for two months; most applicants being from History department of Crimean Engineering and Pedagogical Institute. There were, however, younger participants; Bekir Ablaev, aged 14, was the youngest. Choosing winners was an uneasy task, as the researchers covered a variety of topics.

We Have Basis So Far; Now We Have To Build A Tradition On It

Teachers and students of Crimean Engineering and Pedagogical Institute along with the “Emel” activists and contest sponsors took part in the Awards Ceremony.

According to Mr. Muslim Dervishev, the Head of “Emel”, such contests are to be held in the future, too. “We have basis of the contest so far; now we need to build a tradition on it. We hope for further close cooperation with History department of Crimean Engineering and Pedagogical Institute staff and administration”