Islam Was The First Religion To Guarantee Women’s Rights 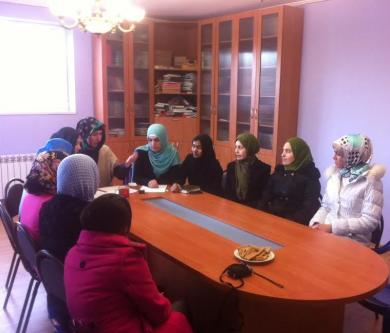 Islam Was The First Religion To Guarantee Women’s Rights

Problems contemplated on November 7 during the roundtable at the Zaporizhzhya Islamic Cultural Centre touched the feelings of every thinking person, not just  women. Muslim woman, a character covered by the veil of speculations and stereotypes, is a completely different view if you study real prescriptions of Islam, not the constant babbling of idle gossips. Why is this character so distorted, then?

Prophet Muhammad, peace and blessings be upon him, said: "The world and all things in it are valuable; but the most valuable thing in the world is a virtuous woman." Islam defined every woman’s high position both in the society as a whole and its unit that is family.

Perhaps That’s The Reason Why The Islamic Civilization Lost Its Leading Position On The International Stage?

The participatns discussed the position women of different nations were in before those nations adopted Islam as their way of life, in order to figure out how far revolutional was the  codification of the women’s rights in the divine afflation at the time it was sent. Perhaps distancing themselves from the high standard they once adopted was the reason why the Islamic Civilization lost its leading position on the international stage?

For limitations laid upon women in developing their personalities mean unavoidable downgrade of the society as a whole: an educated and moderated mother imparts her knowledge and her experience both to her daughters and sons. She can support her husband in his benevolent intentions and give him a piece of good advice. For that reason the level of education of the whole society, namely their men, decreases as soon as they deprive their women of education and culture.

The Creator, well knowing the character of His creations, sent down the law in order to maintain the necessary balance and guarantee the welfare of the society. It depends on each of us if we are able to use this instrument correctly.