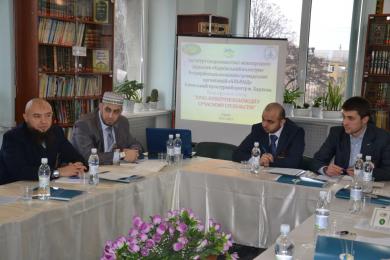 Monitoring of xenophobic sentiments throughout the history of Independent Ukraine at first hand, evolution of a family as a social institute and topical issues of interethnic and interfaith dialogue in contemporary Ukrainian society were discussed during the roundtable on “Cross-cultural Interactions In Modern Society” at Kharkiv Islamic Cultural Centre.

Not only representatives of Kharkiv higher educational bodies, but also students, graduates and teachers from other Ukrainian cities revealed genuine interest for the event, showing that developing tolerance is the matter of concern for the people of science.

“The xenophobia rates at times of  establishing Ukrainian Statehood were way better than they are now. These rates started decreasing since 2000 and then began increasing again in 2007. Econome had a great impact on the process: xenophobia rates decreased when the GDP increased, though there were other factors as well,” — the Ph.D. Ms. Yulia Sedaya, expert in social studies and associate professor at Kharkiv National Medical University, explained.

“In the past, nobody could even think of getting married without the parents’ blessing, and divorce was an extremely rare occasion. 58% of today’s marriages, unfortunately, end up with divorce, which is not just cold hard facts, but broken homes and abandoned children.”

The culture of interactions, not only interpersonal, interethnic and interfaith, but domestic as well, is implanted during childhood. The adults have to work hard on that, as implanting something you don’t do yourself is extremely hard, and practicing something you don’t even understand is almost impossible. If the parents want their children to be happily married in the future — both of them must do their best to educate themselves on the matter and find means of filling their own marriage with understanding, respect and mutual support.

Qur’an Is The Holy Book For Dialogue

The RAMU “Umma” representative Mr. Evhen Glushchenko spoke about intercultural tolerance based on the rulings enacted by Prophet Muhammad, peace and blessings be upon him, and the Rashidun. He also mentioned how important the dialogue is as one of the bases of Islam, stressing that the Holy Qur’an is at bottom the book of the dialogue.

“The Qur’an not only describes dialogue as one of the means of finding the truth — i.e. centuries of dialogues between the prophets and the nations they were sent to or humans inner dialogue while taking every decision.THe Holy Book describes the dialogues between God and the Devil, the Angels, which shows us the importance of this means of communication, as even The One Who can simply command His creations chooses to explain His will with categories common and clear for them, giving everyone — even the Satan — the possibility to make their own free choice  and reveal themselves, and always providing them with a possibility for repentance.”