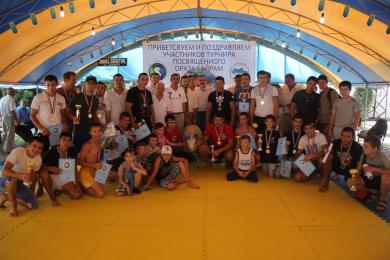 On August 10 during the third day of Eid al-Fitr celebration the third annual Kuresh (Crimean Tatar traditional wrestling) Competition was held hosted by the AUASO “Alraid”, Ministry of Science, Education, Youth and Sports of Crimea and Crimean Federation of Kuresh Wrestling. It’s been quite long since “Alraid” started supporting and promoting sports and healthy life by arranging different sports competitions.

Holding Kuresh competitions the same day as the great Muslim Holidays Eid al-Fitr and Eid al-Adha revives several Crimean Tatar traditions at the same time, as it was a required element of these festivals on the old days.

As the Chief Referee Seidamet Yagyaev said, this is a part of Crimean Tatar national and religious identity.

The Crimean Federation of Kuresh Wrestling Honorary President Rustem Kazakov said that he was very glad with the fact the competition became traditional and thanked AUASO “Alraid” for supporting national sports and promoting healthy way of life in Crimea.

Prophet Muhammad, peace and blessings be upon him, encouraged sports for staying fit. The speakers underlined the importance of developing this sports for the youth, as it provides physical development of the young men and preserves Crimean Tatar national culture. None of the speakers failed to wish good luck for the participants.

Wrestled For A Ram

About 50 sportsmen from different cities and regions of Crimea took part in the competition this year in two weight and age categories.

Ilimdar Saidov, a sportsman from Simferopol, became the absolute champion for the second time in a row. He carried the main prise, a live ram, on his shoulders.

Sportsmen who won the top places were rewarded with medals and certificates, and the winners also received cups, special competition T-shirts and valuable prises.

Everybody was asked to join the festive dinner after the competition was over.