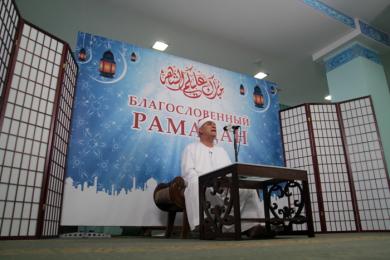 On the threshold of Ramadan-2013 (1434 Hijri) RAMU “Umma” and AUASO “Alraid” traditionally invited foreign theologists for personal enrichment of Ukrainian Muslims. Six “Al-Azhar” theologists came to Ukraine under the auspices of Embassy of Arab Republic of Egypt and The Ministry for Religion and Waqoof of Egypt. THey will spend the Holy month in “Alraid” Islamic Cultural Centres (ICC) in different cities of Ukraine.

The shaikhs will be leading collective prayers, teach local muslims to elocute the Holy Qur’an and give lectures.

The foreign guests are graduates of “Al-Azhar”, which is one of the most authoritative Theological Universities in Islamic World. they represent moderate Islamic teaching of “al-wasatiyyah” (ar. “moderation”, “balance”, “centralism”).

Such visits are initiated by AUASO “Alraid” in order to extend the boundaries of Perception for Ukrainian Muslims and provide them with a possibility to study the techniques of different scholars and see the variety of views. Besides, such interaction allows to discover something new even in simple common issues as each scholar accentuates different aspects of the issue.