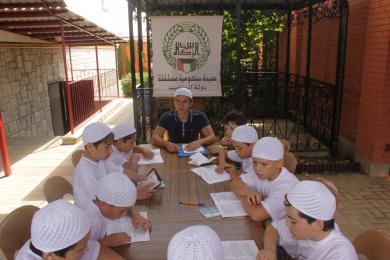 The Annual Summer Camp For Orphans was held on June, 1-8, 2013 in the town of Nikolaevka, Crimea. It was organized by AUASO “Alraid” within the framework of their Orphan assistance programme.

Children of both sexes had the camp recreation on the same time, but in different places this year. They settled 50 boys on a leisure base, while 85 girls were in a holiday hotel.

During those seven days the children attended a number of lectures allowing them to develop a more concrete understanding of bases of Islam and love for their parents and the Prophet, peace be upon him, and also learned to perform everyday prayers.

The teenagers were divided to groups of 7 or 8, and each group had a separate teacher. This allowed reaching a better interaction and strengthen the teacher’s focus on each child.

This article may have been exceptionally blooming, but the truth is that many of the participants of these camps are raised in broken homes or foster families. Basically they are so-called “street children” whose sensitive issue is social hierarchy. These children are rather avoidant and won’t be obedient pupils unless the teacher gains their trust and becomes the true team leader — not a mentor who applies compulsion just because he or she can.

However, these so called “screwed-up kids” understand the language of serenity and kindness perfectly well, and the teacher can attain order in his class with little effort, if he explains the rules as the necessary regulation instrument for improving life of every member of the team,  and not the teacher’s authority demonstration.

Almost everybody showed understanding when explained the rules this way, and only grassroots disagreements happen from time to time. These conflicts, though, are eliminated in the egg.

You may ask  — how they achieve such amazing results? Simple: all the teachers have respective education and a huge experience of working with kids deprived of paternal care or both parents. Moreover, many of the teachers used to attend the same camp when teenagers. They were in the same situation, they know what it’s like to be in those kids’ shoes, and they are willing to help them get a better future.

The routine was organized around five obligatory prayers, which the children perormed collectively. There was a 10-minute lesson before each prayer where the teachers gave them parabolic stories showing how a Muslim should behave in different situations.

And then again, the camp administration put the all classes before noon: a lecture after breakfast, practical classes after the break, where the kids could discuss the new information, ask questions and voice their opinion. The topics for discussion included belief in God, respect for parents, high morals, love for Prophet Mohammad (peace be upon him), prayers regulation and so on. All of this allowed the pupils to develop general understanding of Islam.

After lunch and the noon rest children went swimming and playing open-air games.Every evening the pupils voted which cartoon or movie they would watch that day; they played games and did some acting. All these activities improved their socialization skills, formed the feeling of social responsibility, teached them sharing what they have and helping people.

“I Want My Child To Be Raised In Such Surrounding So I Wouldn’t Have To Worry When He’s Grown Up!”

The camp is held for many years by now, and every year parents and guardians express gratitude to both the “Alraid” Annual Summer Camp For Orphans administration and teachers, noting that the teenagers behaviour has made a favourable turn after coming home. The pupils became more continent and balanced, show respect for elders, father, mother and other relatives.

The pupils’ families hope they’ll have another chance to bring their children to such a camp, so they could keep ties with their peers of the same values and religion.

Even the parents and the guardian who themselves aren’t obedient in their religious practice insist that their children study Islam.

One mother gave a simple explanation of what at the first sight seems to be a conundrum: “I just want my child to be raised in such surrounding so I wouldn’t have to worry when he’s grown up!”

Finally we bring this video to your notice, where one of the lessons in form of the game is depicted. The Boy’s Camp teacher Tariq Sarhan concoct a fairy-tale which explains the most important values of a true friend. Children on camera are glad, merry and eagerly interacting with the teacher. This, once again, confirms the simple truth: you can’t give up on kids just because they seem screwed-up.