“Al-Masar” Extends a Helping Hand to Those, Whose Fate Was Stricken by War and Tortures 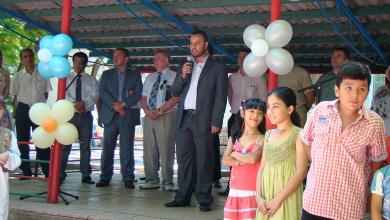 “Al-Masar” Extends a Helping Hand to Those, Whose Fate Was Stricken by War and Tortures

On June, 20th, a charity campaign was held at Chernomorka Refugee Detention Camp (Odessa region). Both the authorities (State Migration Service and Odessa Region Executive) and NGO’s (including “Al-Masar”) took part in the event coincided with the World Refugee Day.

The refugees received things for their daily needs (clothes, food and essentials) — and the festive table of course.

But the “Al-Masar” delegates also took care of the little refugees’ need for playing games. Those children are destined to spend their early years in the Refugee Detention Centre, and have very little of the possibilities their peers use to enjoy. Head of “Al-Massar” Gazi Mustafa and his colleagues brought them toys, and the children were really excited.

“Al-Masar" not only takes part in events of this kind — they also have ongoing programme for collecting clothes from people willing to donate to give those items to poor and needy. All these activities became possible thanks to people’s will to help others, as well as selfless service of “Al-Masar” volunteers.

In the 2012 UNHCR Annual Report the shocking figure is sounded: summarizing the results of 2012 almost 45.2 million refugees seek safety and protection outside their home countries all over the world.

This is really horrible that the number of people seeking refuge in different parts of the world commensurates with the whole Ukrainian population. This enormous number of refugees was blown to the four winds of heaven in order to save their lives and their children and other relatives from the mortal danger and tortures they faced in their homeland.

Kristalina Georgieva,currently serving as European Commissioner for International Cooperation, Humanitarian Aid and Crisis Response, stated in her interview for “The Daily Telegraph”, that the number of refugees only from Syria threatens to exceed 2.5 million.