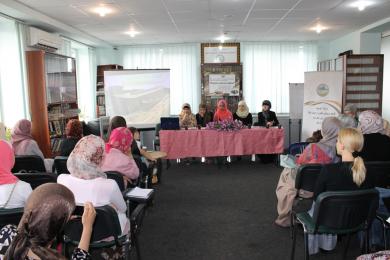 A seminar undertaken by teenager girls from the city of Kharkiv was held on May 27, 2013, in the Islamic Cultural Center “Al-Manar”. These students of Sunday school chose the topic that could be a source for inspiration for both teenagers and adults, “Tenacious Prophets”. When preparing it, the girls showed great enthusiasm and responsibility.

With moderators’ recitation of this Koranic ayah the seminar opened up. It is known that the Most High sent more than 100 000 prophets to various communities in various times of history. Although the Holy Book doesn’t mention all the names, reference is made in it to 25.

But if even accounts are given of only these twenty five, the scope of information would be so large that it would not allow one to contain the key events of their life in several hours of the seminar. To avoid coverage of the immense information, Muslim teenagers gave accounts of only five of them, giving the brilliant examples of the tenacity: Nuh (Hoah), Ibrahim (Abraham), Musa (Moses), Isa (Jesus), and Muhammad (may be peace and blessings upon them all).

“So have patience, as men of resolution, the messengers, had patience”

The reports were short but comprehensive, as all the participants did their best to inform the audience the cases of prophetic lives that could be used as guidance in daily life, on the one hand, and to avoid overtiredness of the listeners, on the other.

As emphasized in all the reports, strong character can only be fostered by showing patience and endurance in life trials.

Biographies of the prophets (may be peace upon them al) need to be learned for better understanding of the religion and looking for models of action in various daily situations, because the prophets were exposed to much more severe trials than everyone else, and learning of their biographies does not allow one to lower hands (to seat still) and be convinced that his/her difficulties and trials are more terrible and unbearable than the others’. It’s not without reason that the Most High calls in His Book: “So have patience, as men of resolution, the messengers, had patience” (Koran, 46:35).

The seminar ended with the traditional tea party with sweets, where the participants could talk or just relax after absorbing and analyzing so concentrated piece of information.

The organizers were fully satisfied and hopeful that meetings like this would be held as frequently as possible, and be a not lesser success with visitors of the Islamic Cultural Center.