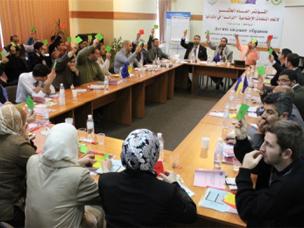 The Association of Social Organizations in Ukraine (ALRAID) held its tenth conference at the end of 2009 – 2011 executive term where the participants discussed the work reports and elected a new president and legislative panel for the federation.

ALRAID tenth general conference was convened in the Ukraine capital city of Kiev in 17th - 18th of December 2011. The leadership of the federation, representatives of specialized institutions, heads of member organizations, diplomatic officials, guests form civil society, leaders of Arab and Islamic communities in the city and members of the federation of Islamic organizations in Europe attended this event.

After the welcome ceremony, ALRAID president Dr. Ismail Kady presented a work report of the federation for the 2009-2011 executive term. Dr Qadhi reviewed the main achievements and activities of the central departments of the federation, its committees and specialized institutions. He detailed the main achievements in the administrative, religious, cultural, educational, charity, public relations, media, and civilizational communication fields.

Moreover, Dr Kady reviewed the challenges and obstacles that the federation encountered during the last executive term. He expressed his thanks to all member organizations and executive bureaus for their effective role in supporting the federation work in Ukraine.

Dr Bassil Mareei the president of legislative panel presented the panel report and highlighted the most important policies adopted by the federation in its work including openness to the Ukrainian society, positive interaction with its issues, and policy of spending rationalization and uniqueness of discourse.

The conference appreciated the efforts of ALRAID associations, bureaus, and specialized institutions for their effective role in unifying ranks and positive interaction to make the strategic five-year plan successful during this executive term and to support the institutional development on the basis of brotherhood, collaboration and love.

The conference witnessed the general elections of the federation which resulted in electing Dr. Bassil Mareei for the presidency office and Mr. Seyran Arifov as a president of the Revision committee.

After presentations and election the conference concluded its work by some recommendations that included "highlighting the importance of unity among the Ukrainian Muslims on the basis of Islamic brotherhood and European and Ukrainian citizenship; the necessity of establishing effective channels of collaboration, communication, integration and dismissing any causes of disunity."

The final statement of the conference stressed on the importance of communication and correlation between the institutions, member associations in cities and the central bureaus of ALAID federation. It also reminded of the necessity of developing institutional work for the member associations and adopting the principle of planning, evaluating and performance follow-up.

The conference also emphasized on the importance of holding various events and programs for the youth and paying special attention to the file of Muslim family as important stesp in assimilating and attracting the second and third generations of Muslim children in Ukraine.

It also confirmed the importance of promoting the right understanding of moderate Islam and spreading this among Muslim children and directing efforts and potentials to serve the public interest.

The conference also warned against some tendencies that want to confine Muslims in Ukraine to a very narrow regional belonging. It also reminded the Ukrainian Muslims of their responsibilities for unifying ranks and unity and their responsibility for avoiding conflict and rift which endanger their efficiency in responding to the challenges and needs of society.

Moreover, the conference urged the Islamic institutions and social organizations in Ukraine to work for unity and unifying the timing of fasting and Islamic festivals. It also urged them to cooperate in the optimal way to meet the cultural and religious needs of the Ukrainian Muslims.

The conference also condemned the violence and oppression in Syria and Yemen and expressed its solidarity with the Islamic and Arab people in their legitimate rights to equity and equality without any differentiation on the basis of ugly sectarianism.

Finally the conference highlighted the necessity of activating the role of ALRAID federation as a communication bridge between Ukraine and the Islamic world in a way that serves the public interest. It also urged the Ukrainian Muslims and different sectors of society to contribute actively to the renaissance and development of the Ukrainian society.