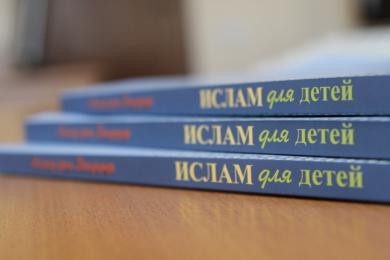 A new edition of the Russian translation of Ahmad fon Dennfer’s book “Islam for Children” was printed in March, 2013. Four earlier publications of this translated book were undertaken by “Ansar Foundation” Publisher. However, this edition differs from the earlier ones (made in rather traditional form) by the narration form that is more understandable for children and vivid illustrations made by Mrs.Tatiyana Yushina.

The printed text is mixed with colorful pictures to attract children’s attention and invite them to learn it without other’s help. Yet, editorial board and the illustrations designer made consideration for impermissibility of portraying prophets’ images in Islam. It is the reason why prophets’ and companions’ images or portraits do not occur in the book.

The original book was written in German in published for the first time in 1977.  After that it was reissued many times in German and was translated into English, Russian and Crimean Tatar languages.

Learning Islam together with young heroes of the book

Being widely known in European countries, this book had many positive responses from Muslim parents. Its new Russian version was revised in a way to make it more convenient for reading without change in the meaning.

The basics of Islam are narrated in it in easy and understandable form. Together with its heroes little Muslims will learn to perform ablution and prayer, memorize several small surahs from the Holy Koran (beginning with the first one, “Al-Fatihah”) and learn the basics of good behavior and stories from prophets’ lives.

Children is our future

All the above makes the book fit both for home reading and for teaching small children the basics of religion. Small readers can make their first steps towards discovering the true meaning of life and understanding the true purpose of their creation by Allah. Editorial board has sincere hope that their work will help small Muslims to grow up led by obedience to the Most High and live the life by His guidance revealed to the humans in the Koran and the Hadith of Prophet Muhammad (may be peace and blessings upon him).

If only we make religious knowledge more understandable for children in the earliest years can we hope that the next generation will grow up more educated, stronger and more steadfast in their faith and worship, able to convey sound information on Islam to other people.