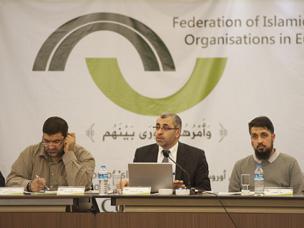 The sixth Congress of the Council of Federation of Islamic Organizations in Europe (FIOE) was held on February 7-10, 2013. “Alraid” was among its founders and active contributors. It’s a regular event held once in a half year. This Congress gathered nearly 50 persons: president and members of the FIOE Executive Committee, representatives from member organizations from a major part of European countries (EU, Balkan countries and East European countries).

It started with general election of the chairman and his two assistants, where Mr.Bassil Mareei, “Alraid” chairman, was elected as an assistant.

FIOE Council submitted the report on actions of member organizations in the past period and implementation of tasks set up earlier. It also discussed actions of the FIOE, its bodies and incorporated organizations.

Also, FIOE Council discussed the situation in Europe and the condition of Muslims on the European continent, means to develop cooperation with compatriots, to maintain cultural and ethnic dialogue for the benefit and prosperity of the whole community.

Muslims must work hard to enhance their opportunities

“I believe that Muslims should work hard to become part of Europe with the same range of opportunities as their compatriots. This will require creating platforms for normalization of life of nearly 45 million of European Muslims”, said Mr. Bassil Mareei in his interview after coming back to Ukraine.

“This should be the developed infrastructure of halal products and services, as well as political, economic, educative and religious one. Nobody will build it but us; we should build it by our effort and provide a wider spectrum of daily and leisure opportunities for our children”.

“We can already see the results that could be achieved in this field by now. If God wills, we will achieve more in future, and it will be the benefit not only for Muslim communities in each country, but for the whole European society”.