Join the “Hot Meals for the Homeless” Benefit in Zaporizhzhia! » Add new comment

Join the “Hot Meals for the Homeless” Benefit in Zaporizhzhia! 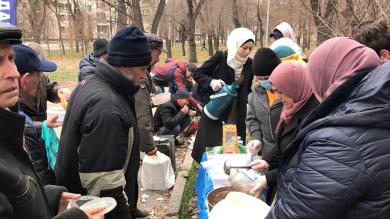 It’s getting cold, and once again hot meals become more than a special treatment, but a means of survival for shelterless people, who, understandable, have no opportunity of cooking hot meals to keep themselves warm. Muslimahs from Zaporizhzhia women’s social organisation “Safya” believe it’s time to revive the practice of hot meals giveaways for people who desperately need them.

“God willing, we are planning to cook the meals on a weekly basis, on Saturdays, and help people in need. We symbolically launched the initiative in the month of Prophet Muhammad’s (peace and blessings be upon him) birth. Join us!”

On that day, they offered hot soup with meat, sandwiches and other appetizers.

Noteworthy, Zaporizhzhia Muslims are regular participants of such benefits during the cold season. Last time, they feed hot meals to homeless people along with the local Red Cross Chapter on February-2019: 50 portions of hot pilaf with meat and salad, with bread and utensils added to each pack, were given away at the local railway station.

It’s the station’s waiting room where many homeless people can find shelter when it’s cold - the only place, actually, where they have a chance to somehow warm up. Not to mention that hot homemade meals aren’t something they have very often. For that reason, the homeless greeted the Muslim volunteers and thanked them very warmly, too.

According to the ICC’s Imam, Muhammad Mamutov, “those people are deprived of things that we consider ordinary, such as coziness, warmth and support from family and friends. Still even in a situation like that, they manage not to lose hope and take care of their companions in misfortune”.