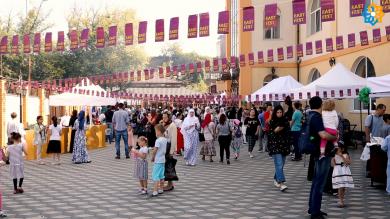 It’s been three years already since the East Fest was first held, and it’s gaining more and more momentum — for those who visited last year or two years ago, are already in love with the festival, and they bring their friends along, too. This year’s festival drew attention even from Kyiv Region State Administration, and, besides the Head of CSUAUA “Alraid” Seyran Aryfov, the guests were greeted by the Head of KRSA’s Head of Religions and Nationalities Department Ihor Podolianets.

But the day was, of course, memorable not due to the greeting speeches: children performing nasheeds, Crimean Tatar Children’s Dance Assemble performing traditional dancing, an armwrestling tournament, a demonstration of women’s traditional garment of different ethnic groups, souvenirs and gifts distributed by pill pull and many other interesting things were sure to catch everyone’s attention. Besides, two prayers, Dhuhr and Asr, came during the festival, so those interested in the spiritual side of the life of Muslims could see how the prayers are performed.

Atop of that, the guests were offered to attend a number of lectures: Ms.Oksana Loik told about her journey to Afghanistan, Ms.Solomiia Vivchar spoke about the links between Ivan Franko and he Muslim World, Ms.Tetiana Evloeva shared lifehacks on producing less waste, and Yevhen Hlushchenko told everyone interested about the very basics of Islam.The pavilion where lectures were held, also hosted an exhibition of a young photographer Ms.Aisha Isa.

The children weren’t bored as well: at their service were animators, chemical experiments, games, presets, a quest, and the whole mount of children’s Islamic literature and Islam-related board games. Handmade toys, master-classes and treats were sure to be remembered by the youngest guests.

Still, the adults weren’t left without tasties and pleasant purchases: at the festival, one could try traditional dishes from different parts of the world, not to mention the atmosphere of a traditional oriental market with plenty of clothes (both traditional and designers), kerchiefs and headscarves, jewelry, oil perfumes and natural care products. Dolls in traditional garments of different ethnicities were of great interest, as well.

Admittedly, the tradition continued this year and he guests started asking when the next festival would be even before the current one was over. Which means… To be continued!