Independence Lessons started already on the first of September 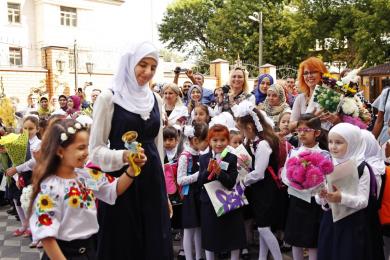 We truly realized the value of the independence only when it was at the big risk. We should not allow such carelessness no longer, otherwise we, as a country, have no future. That is why the teachers of the gymnasium "Our Future" made a collective decision: to dedicate the first lesson of the Day of Knowledge to the 25th anniversary of Ukraine's independence and to tell schoolchildren how difficult the independence has been achieved, and why is important to preserve it.

The number of the pupils has increased in the gymnasium. In the first bell morning almost two hundred children's voices sang the anthem of Ukraine on the solemn lineup (last year there were about one hundred and twenty pupils).

In addition, this year the pupils of the gymnasium will pass the state exams for the first time: yesterday's eighth graders passed to the ninth grade. Naturally, it makes pupils take teachers' advises more seriously.

Another point reminded to ninth graders that they were almost adults – they were told to hand out the gifts (school supply kits) for youngest pupils.

Kyiv first Muslim gymnasium educates children according to the program adopted by the Ministry of Education. The gymnasium has some specific features: additional subjects (Koran lessons, Islamic ethics, the Arabic language as a second foreign language in addition to English), halal food, small classes and teachers' high attention to every pupil.

By the way, despite the fact that it is the Islamic gymnasium, its doors are open for pupils and teachers of all faiths.