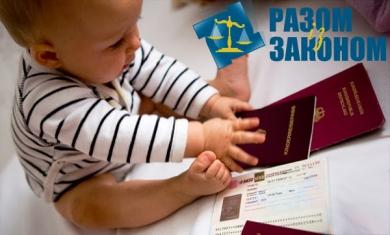 Your family just got a little bundle from heaven, and among other cares you are obliged to register the baby within a month. If you fail to do so without reasonable excuse, you can be fined at amount of UAH 17 to 51. Besides, one can’t draw up a child subsidy.

In this material you will learn:

— Where one can register a baby;

— What documents are necessary during registration;

— Who can register a baby;

— Who can be recorded as the child’s parents;

— How the name, surname and father’s name is defined;

— How the child’s citizenship is defined;

— How one can bury a dead born baby.

Where one can register a baby

The baby’s data is recorded in a Newborn logbook as well as in a birth certificate, the child’s first document, issued on a free of charge basis on the very same day when applied for.

As the family’s place of actual residence is often different from the place where its members are registered, we draw your attention to the fact that Vital Records Office isn’t authorized to deny the registration claiming that the parents must approach another Vital Records Office.

What documents are necessary during registration

One needs to provide the following documents in order to register a child at a Vital Records Office:

— parents’ (or one parent’s) application, written or oral. Other relatives can apply in case the parents can’t do it for some reason;

— passports or other documents identifying the parents (or one parent);

— passport or another document identifying the applicant (in case when it’s not one of the parents who applies);

— marriage certificate (in case when the medical documents contain the mother’s maiden name, or the mother didn’t manage to change her passport according to her new surname before the child was born), no need to provided if the marriage is registered by the same Office;

— parents’ joint application (in case the baby is born by a substitute mother) who agreed to transfer the oospore to another woman’s womb; application of this woman stating that she agrees that these people are the child’s parents, signed and notarized; medical certificate on genetic affinity of the parents and the baby;

If the child is born on transport, its registration is based on an act signed by an official (captain, officer commanding, chief, etc.), two witnesses and a doctor (or medical assistant). If there was neither doctor nor medical assistant on the transport, a medical document certifying that the baby is supervised by a healthcare facility (form 103–1 / о) is provided.

If a baby is born abroad and wasn’t registered in the place where it was born, a legalized medical document issued by authorized institution of that country is provided.

If the parents can’t provide any of the documents listed above, the fact that this concrete woman gave birth to this concrete child is settled in a court of law, and the baby’s further registration is based on the court decision.

Who can register a baby

If the parents are officially married and have a common surname, any of them can register the child. If they are not officially married or if the married couple have different surnames, it’s better to come together and draw a joint application for issuing a birth certificate for their child.

The child can be registered by other relatives as well, provided they have a notarized mandate from the parents.

Who can be recorded as the child’s parents

Sa a rule, if a baby is born within a wedlock, the husband is recorded as its father and the wife is recorded as its mother. There are, however, two exceptions: if there is a court decision for the couple’s separate living, a baby born 10 months later is not considered as the husband’s child; if there’s a joint claim by the couple that the husband is not the father of the child, supported by the claim of the real father.

If the baby is born before 10 months of divorce, both former spouses are recorded as parents. If the mother, however, remarried during these 10 months, her new husband is recorded as the child’s father.

If the parents aren’t officially married, their joint claim on acknowledging the man’s paternity is enough for him to be recorded as the child’s father. As a matter of fact, this claim can be made even before the child is born, provided they also bring a certificate about the woman’s pregnancy from the medical facility.

A claim on acknowledging the man’s paternity can be brought by deputy (provided this person has the notarized mandate) or sent by mail (in this case the father’s signature must be notarized).

How the name, surname and father’s name is defined

The following data is indicated in the child’s birth certificate: name, father’s name, surname, date and place of birth, parents’ data, citizenship of one of the parents.

It’s better to chose the name in advance, as the baby can’t be registered with no name. The name is defined upon the parents’ mutual agreement. A child can be given not more than 2 names unless other comes out of traditions of the national minorities the parents belong to. Argument upon naming the child can be solved by the court of law.

If the parents wish a certain spelling of the name, or to give the baby the shortened name instead of full, they must indicate this in their application.

If the child is born out of wedlock and the claim on acknowledging one’s paternity is absent, father’s data and the child’s father’s name is recorded due to the child's mother testimony.

Divorce or avoidance of the marriage doesn’t result in changing the children’s surnames.

How the child’s citizenship is defined

If a Ukrainian citizen is acknowledged as a child’s father and the mother is of a foreign citizenship or a stateless person, the child can be registered as a citizen of Ukraine regardless its place of birth and permanent residence.

How one can bury a dead born baby

There is a 28-weeks edge when an unborn child is considered a fetus. Beginning from the 197th day of pregnancy the child, who died in a womb or during delivery, as well as during the postpartum period, is buried the very same way as any other human being. Children who were born dead after 196 days (28 weeks) of pregnancy have the same social guarantees as any other deceased citizen, and its parents can receive social allowance for the funeral.

The medical facility staff are obliged to immediately inform the relatives of the baby who died during the postpartum period. Its corpse will be kept in a mortuary up to 7 days free of charge. It is strongly recommended, however, to pick the corpse within 2 days after autopsy or to name external reasons for prolonging this term.

One should receive the death certificate at the maternity hospital, it will be necessary for receiving a burial certificate at a Vital Records Office, and for further funeral.

If the relatives don’t come to pick the corpse for some reasons, it’s either buried or cremated by the special city service within three days after the assignment of cause of death/ Parents have to sign a consent for the autopsy.

In case the corpse is cremated, the mortuary urn can be received within a year since the date of cremation; unclaimed urns are buried in the paupers' grave.