Women’s Footprints On The Sand Of Time » Add new comment

Women’s Footprints On The Sand Of Time 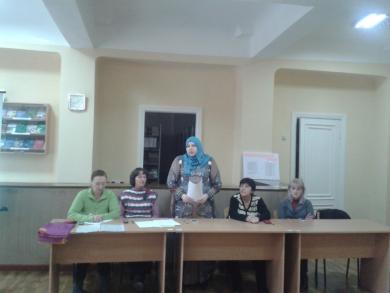 Women’s Footprints On The Sand Of Time

A set of lectures on women, whose determination changed the history of mankind, started in the city of Makeevka on December 17. The project facilitator, head of the Makeevka social organisation “Vostok” (“The East”) Ms. Elina Avramenko set a goal not only to describe biographies of the famous women, but also show the impact their decisions and actions had on the historical events of great importance, and how these actions sealed the outcome of those events.

The topic was quite intriguing, so more than 70 people came to the Makeevka Polytechnic College (MPC) where the event was held, namely the students and representatives of the local Muslim community.

World Religions: The Power Behind The Throne

Fe people wonder what the history of the three world’s monotheistic religions would be without the women, each of whom made a strong contribution in preserving and wide spreading them, although remaining in the shadow herself.

What Would The World Be Except For These Women?

The first of them saved her nation from holocaust by the Babylonians; the second was Jesus Christ’s (peace be upon him) devoted follower and after his crucifixion went to Efes and helped St. John the Evangelist in his theological works. The third of these women was the first one to believe in Muhammad's prophecy and mission and it was her support that didn’t let the mission end at the very beginning.

Events devoted to other prominent women whose impact on the History was valuable as well are planned within the project.