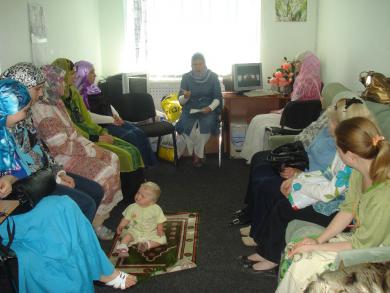 In Kharkov took place first family Seminar under Motto "Pride to be a Muslim", organized by Female Club of "Al-Manar" ICC

There is no person on the Earth in whose life there would be no family. Since our childhood we are surrounded by attentive and kind parents, and while growing up, we search for a loving and true couple, have children. It was them who became the reason of carrying out of the action.

The first family seminar was opened by the secretary of the Female Club, the member of the committee of the Female Department of the ICC "Al-Manar", Anna Otman, who carried out training among 50 teenagers aged from 7 to 14. "To be a Muslim means to worship Allah the Almighty properly as He ordered it. By one's own behavior and manners to show the surrounding the truth of Islam thanks to the best customs which the Prophet (pbuh) taught us - to become a role model  for the associates",  she addressed to the present.   Children with a great interest and responsibility сonsidered the training: they took active part, solved the problems put before them, acted with small reports. In the end the children summed up that each of them is able to exercise instructions of the Almighty in the best way and they have what to be proud of, after all they are Muslims.

Except teenagers their parents were invited to the seminar, too. They attended the separate lecture course.   Main points which excite the majority of Muslim parents are how to bring up children without any mistakes in the modern world, where negative stereotypes about Islam are widespread, and where many Muslim families face that their children hesitate to admit that they are Muslims, "And what friends at school will tell, neighboring children, if someone learns, what will be then?" Why and what is the reason of similar behavior of children?

The father of three children, the teacher of the children's Sunday school at the ICC "Al-Manar", Ustaz Hajj Murad, certainly, has possibility to share and teach about those moments which worried him and which he passed together with his family. He raised these issues to help parents to cope with this not easy problem – education of young generations in the bosom of Islam.

"The principal cause why children feel shy of their religion is their parents. If the child visits Islamic employment at madrasa it will be ineffective if in the family the spirit of Islam is not supported", he started begun introductory lecture for parents, - "Parents should realize and practice their religion, then there will be something to be proud of, hence children will follow their positive example". The Ustaz again and again reminded parents that their basic purpose is to acquaint the child with the correct understanding of religion, and that the child should see Islam not only in books, but also in actions of his own father and mother.   Examples from life of students of the Ustaz did not leave anybody indifferent, inducing passionately to wish changes and installing belief that your child can be like this.

Throughout the seminar the member of the committee of the Female Department, sister Svetlana Putilina gave a set of wise advices on education of the child, but the most important thing is that we should gain their trust, learn to listen to our children, become for them loyal friends, direct and give necessary advice in a necessary minute, only then they will trust us, will listen to us and consult us in all questions.   We and our children can feel pride that we are Muslims, only truly following a direct way which was specified to us by Allah the Almighty and explained His Messenger (pbuh), - and it demands considerable efforts from parents on the way of Allah, to protect our children from fire. About such people Allah said, "Ye are the best of peoples, evolved for mankind, enjoining what is right, forbidding what is wrong, and believing in Allah" (The Holy Quran 3:110).